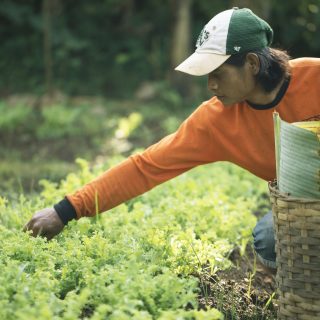 Written by SayurBox at May 31, 2017
Inspirasi • Kisah Petani

People often compare plants to people: many know about the experiment where one plant has nice things said to it while another was bullied, and the former grew at a faster rate while the latter grew slower. Well, this comparison extends even further. Some plants grow better if a plant of another kind is growing near it— these are called companion plants! But like humans, some plants are also detrimental to each other. Companion planting is a somewhat controversial topic, so it is up to the gardener to believe if it’s real. However, there is no known disadvantage to companion planting.

Is there any scientific basis on companion planting?

There is! A common example of companion planting is a Three Sisters Garden. This type of garden was originally coined by Native Americans and consists of three crops: corn, beans, and squash. The plants were said by Native American legend to be given by the gods, and that they should be grown and eaten together. In the modern day, scientists have determined that there is a scientific reasoning for why they grow so well with each other!

Here’s the rundown; corn offers the beans support with the roots; beans takes in nitrogen and distribute it into the soil, helping all three of them; the tangle of squash vines holds the plants close together, the squash itself keeping pests like raccoons away, and the squash leaves giving shade with its large leaves, keeping soil cool and moist and preventing weed growth.

Despite the common sense and science behind the Three Sisters, many other companion plants are found through personal experience. These companion plants only seem to grow better or worse with each other, and with no real scientific basis, it leaves people skeptical.

Should I try companion planting?

If you truly want to experiment with it, go ahead! There is nothing about companion planting that puts you at extreme risk. Additionally, many farmers have posted their findings online, for people willing to experiment.

That’s it for now, catch you all on the next post!